Aliso Viejo shutters have always been a very popular window covering solution for many people. They long for the dream that they can put custom wood shutters up and not break the bank doing so. Well at Orange County Shutters we have the solution just like we did for this wonderful client in Aliso Viejo, CA. This customer is dear to my heart, not just because her name is Rebecca like mine, but her story at to how she longed for Aliso Viejo shutters and thought she could never reach her dream or having Aliso Viejo shutters due to the price. It started back a few years ago. She had gotten estimates from a few other manufacturers to have custom wood plantation shutters made for her home in Aliso Viejo. Every estimate she got was even more money that 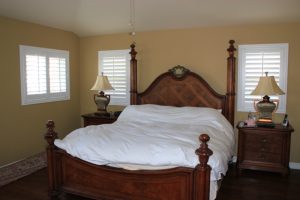 the next and simply outside of the budget for her at that time. So with the dream still in her heart of wood shutters she though perhaps she would save up a bit and one day get her shutters. Well time went on and life also did as well. She had given birth to twins and now wanted Aliso Viejo shutters more than ever, because the blinds she had with the cords may be a safety hazard. She once again got a few estimates and again the pricing was just outside the budget and the quality was just average. With discouragement in her head she thought just one more estimate and then if that doesn’t work maybe wood shutters were not meant for her. Here is where I came into the picture. I was the designer that was set up to go to Rebecca’s house that day. I think by default since we have the same first name, but I was so glad to meet her. After going over all the options that we could do and showing her what solutions we have for  her eyebrow windows we came up with the perfect shutters for her windows. We chose the 3 1/2″ louvers in a soft white color tone to blend with the sandy color of her walls. The standard tilt option gave for a more traditional feel for the homes. Also the Z frame hugged the walls tight so no little ones would have any sharp corners to run into. The eyebrow windows and high entry windows were framed the same way and we decided to have the horizontal louvers to match the rest as opposed to the sunburst look. After picking out everything she was bracing for the steep price that she had been given by many others. Much to her surprise the price was almost half of the others she had priced out. With tears in her eyes realizing that her dream of shutters could finally be a reality with Orange County Shutters she quickly grabbed her check book and jumped on the chance for her Aliso Viejo shutters dreams to come true. About 6 weeks later her new shutters were professionals installed. They were perfect and thus fulfilling Rebecca’s dream for custom wood shutters.